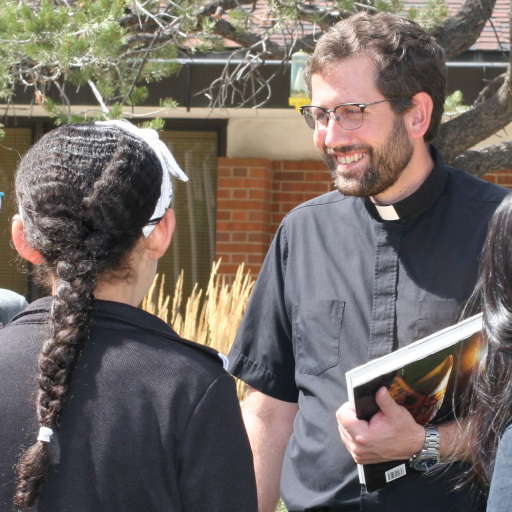 When Americans think of poverty, lack of material needs is usually what first comes to mind. Yet, humans can experience poverty in a number of different ways. That is the premise of a project undertaken by Father Joe Dygert’s Catholic Social Teaching class at St. Mary’s High School. When three current seniors reflected on their experiences with the project last year, they found their perspectives changed as they encountered the homeless of Colorado Springs through the project.

For the last two years, Father Dygert has asked his junior year students to talk to someone who has a poverty different from their own. The purpose of the project is to help the students understand someone who comes from a different place.

“I think that everyone suffers from some kind of poverty. It doesn’t have to be material poverty; it might be loneliness or sickness or other struggles that human beings have,” Dygert said. “Throughout our lives, we all have encountered some kind of experience of poverty. People can be isolated and lonely and that’s a deeper poverty than material poverty. And sometimes having a conversation with someone exactly addresses their poverty of isolation or loneliness. You’re showing someone that they are worth getting to know.”

While the students were free to talk to whomever they chose, Father Dygert offered opportunities to the students, which last year included reaching out through a homeless outreach in downtown Colorado Springs. Over the last year, Father Dygert and Alex Rysavy, St. Mary’s class of ’10, have been connecting with the local homeless community through a partnership with an established Catholic homeless outreach. While food is used to make the initial contact, the outreach is primarily about having conversations with the homeless and helping them feel heard.

“When we started looking at homeless ministries, we found that the homeless in our area don’t lack for physical resources because Colorado Springs has many ministries, like the Marian House, that meet those needs,” Rysavy said. “What they are missing is being seen as an equal, someone giving them time and having human interaction and contact. That’s what they are starving for.”

When Father Dygert offered his students an opportunity to join the homeless outreach, several decided to participate. For Alexa LaMack, the experience was completely outside her comfort zone. While St. Mary’s students are required to complete a certain number of community service hours each year, LaMack, who wants to be a teacher, had mostly served in opportunities that involved working with children, such as at St. Mary’s partner schools and sports camps. She had no idea what to expect when meeting the homeless.

“It was life-changing in a sense, although I know that sounds cliche,” LaMack said. “People were so open about their stories. This one woman was pregnant, so we gave her food, and asked if we could pray with her. She just started crying and said that she had felt so alone. It hurt my heart to see that; the impact we had on her by just asking to pray for her. You don’t need to give money. So many of the homeless are just craving conversation and love, and that’s free to give.”

LaMack said that the experience caused her to examine her thoughts and assumptions about others. She was shocked at the number of homeless they encountered who were high-school age. LaMack said it made her realize how blessed she is to have two parents who care about her.

“At St. Mary’s we’re only exposed to 250 kids, we’re just kind of in this bubble and we don’t really realize how blessed we truly are,” she said. “But being on the street talking to people from different backgrounds and situations made me realize that my assumptions about their situations usually weren’t right. Some people haven’t even heard their names in months. I gained a new respect and empathy for people in that situation.”

Catherine Cummings had a similar experience. She said the experience exceeded her expectations, but not in the ways that she thought it would. What she found was that she wasn’t as open-minded as she thought she was.

“I went in more closed-minded than I thought I was,” Cummings said. “What I learned was that the homeless don’t fit into that box that most people want to put them in. I was surprised by how conversational the homeless were and they weren’t prideful in any way. They had so many good thoughts and opinions but people don’t want to listen to them.  I wasn’t expecting to get as much out of the conversation as I did. I think many people could learn from spending time with the homeless.”

Josephine Howery had volunteered at the Marian House serving the homeless, but hadn’t had the chance to interact with them. So when Father Dygert offered the opportunity to go downtown, Howery decided she wanted to challenge herself with something outside her comfort zone.

“It definitely changed me,” she said. “I can look at people on the street now and not be scared. Now I see that they still have things to offer the world; they have emotions and talents that we might not notice if we just drive by.”

In the spring, Father Dygert will assign the exploring poverty project to St. Mary’s current juniors. If they choose to participate in the homeless ministry, they may be joined by at least three of the seniors; LaMack, Cummings, and Howery all said that they would like to do more homeless outreach in the future.

“It’s one of my favorite projects for the students,” Dygert said. “It translates into real life; it’s a real encounter with a person. Christianity is all about encountering persons. Of course, we do that through the Trinity–the Father, Son, and Holy Spirit–but also through the other human beings around us. It is essential to the Christian faith that we serve other people in their particular poverty, whatever that may be, but you can’t serve someone unless you get to know them.”