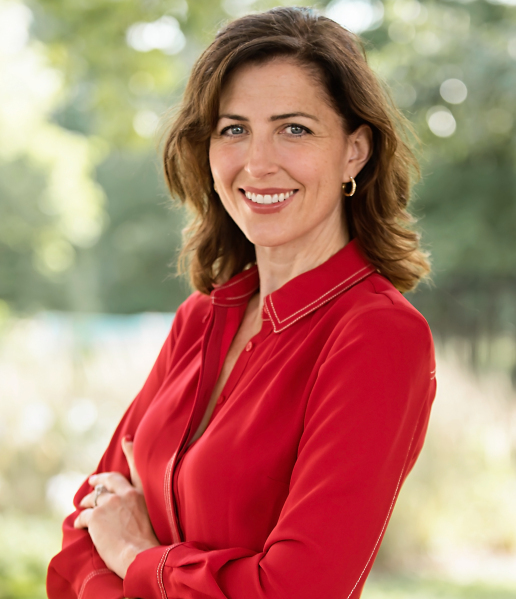 “I never copped to being a perfectionist until I became a mother, but looking back, I think perfectionism was always part of my story,” said Campbell, a 1992 graduate of St. Mary’s. “For most of my school years, I was a straight-A student; at least until I hit the upper-level math and science classes at St. Mary’s—neither were my strong suits! I applied for and won a lot of scholarships at the end of high school, always took summer jobs and volunteer opportunities with an eye toward their professional potential, and may have been known to spell-check my high school boyfriend’s love letters.”

Campbell said she moved around a lot as a child, arriving at St. Mary’s after having lived in five other states and attended six other schools. Her résumé building started in grade school, and with each move, she tried to find her niche through achievement. She didn’t see problems with feeling dejected after an occasional second-place finish at a forensic meet or missing the first half of prom to perform in a show at Pikes Peak Community College.

“For me, choices like that were a little tough but ultimately were no-brainers: Achievements, acting gigs and good grades were tangible proofs of my worth and potential, something that provided security and moved me one step closer to my grand ambitions for the future. Missing out on a little fun for them didn’t seem like much of a trade-off,” she said.

In college, Campbell’s dream shifted to journalism and again her strive for perfection served her well. After graduating from Marquette University, her career included work at secular newspapers, serving the Oval Office as a speechwriter for George W. Bush, writing a critically acclaimed first book, The New Faithful, and anchoring a national newscast for EWTN, the global Catholic television network.

“The drive for excellence that is linked to my perfectionism has often benefited me professionally,” she said. “When I do something, I give it my all.”

Motherhood is what started to change Campbell’s view of perfectionism. A few weeks after Campbell gave birth to her first children, a set of twins, a friend told her that there is no room for perfectionism in motherhood. It’s a statement that Campbell, now a mother of four, has found to be true.

“It’s in my personal life—and specifically, my spiritual life—where I’ve seen the dangers of perfectionism most clearly,” she said. “There’s no way we’ll do everything we want to do for our families as well as we want to do it. And if we spend all our energy beating ourselves up for our inevitable failures—something I’ve been known to do, over everything from a freak accident that led to an ER visit to being less than fully present during the bedtime routine—we’ll have no energy left over for delighting in our children and teaching them through our mistakes as well as our successes what it means to share and receive God’s mercy.”

Campbell’s growing concern over her own spiritual perfectionism led her to again explore the lives of the saints. In her 2012 award-winning book, “My Sisters the Saints: A Spiritual Memoir,” Campbell blended her own stories of trials and breakthroughs and the wisdom gained through the process with the stories of six saints. That second book, which sold almost 100,000 copies and has been published in five languages, wasn’t originally planned to be such a personal one. But Campbell said she knew from the start that “The Heart of Perfection” would need her personal narrative.

“The one comment I heard over and over from readers of My Sisters the Saints was that they appreciated my willingness to share honestly about my spiritual questions and stumbles,” she said. “Since The Heart of Perfection was inspired by my own experiences, I knew I couldn’t write an honest, life-giving book on perfectionism unless I was willing to put myself out there again, warts and all.”

Campbell admitted that while she has not fully recovered from her perfectionist tendencies, she feels that she is further along on the journey to let go of perfectionism after working on “The Heart of Perfection.” In the book, Campbell adds to her personal narrative the stories of seven saints, and one heretic, who struggled with comparison and impossible expectations. She introduces her readers to the struggles of Jane de Chantal, Saint Francis de Sales, Alphonsus Liguori, Ignatius of Loyola, Francis of Assisi, Benedict of Nursia, Thérèse of Lisieux, and Angélique Arnaud.

“The reality of God’s unconditional love for me, no matter what I achieve or don’t achieve any given day, is more central to my spiritual life than it once was,” Campbell said. “So is my awareness of my moment-by-moment need for His grace. I think when it comes to trading the straitjacket of worldly perfectionism for the liberating pursuit of gospel perfection, half the battle is simply waking up to the fact that you need to change and that you can’t change by willpower alone. I’m awake now. Studying the lives of the recovering perfectionist saints, and digging into Scripture to discover how God really defines perfection, has led me to agree wholeheartedly with Saint Thérèse: ‘All is grace.’”

Campbell’s life now is different from the life she led when her last book was released. She and her husband have added two children to their family in the last six years; Campbell left her job at EWTN after her fourth child was born. Then three years ago, her family left Washington, DC, and returned to St. Louis, where she now homeschools her four children and concentrates her professional time on speaking and writing. Each day she said she feels blessed to pursue the opportunities God has provided for her, including using her writing and gifts to tell of the mercies of God.

“We live in an age increasingly forgetful of God, where pews are emptying and ‘nones’ (those with no religious affiliation) are rising,” Campbell said. “Our world doesn’t need more arguments for God. Our world needs more stories of His love—stories of the saints who have run the good race, yes, and also stories of those of us who are still running, stumbles and all, toward the finish line.”