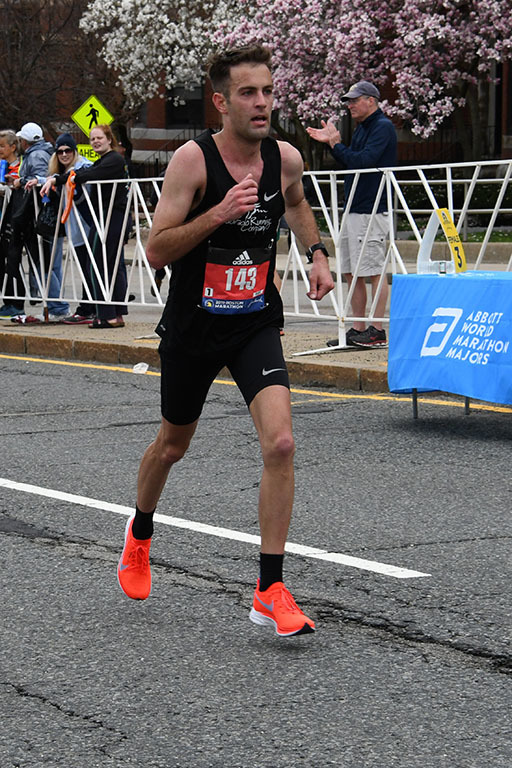 Two events that happen only once every four years—the US Olympic Marathon Trials and Leap Day—will occur on the same day this year. Yet, the United States’ most exclusive marathon will be especially memorable for Colorado Springs runner Stephen VanGampleare, a 2008 graduate of St. Mary’s High School, who qualified for the trials for the first time. The marathon trials will be held in Atlanta on Feb. 29 with the men’s race starting at 12:03 pm. The trials will be broadcast on NBC.

In 2017 VanGampleare set his sights on competing in the Olympic Trials, but his qualifying for the 2020 event was still somewhat of a surprise. The 2019 Boston Marathon was VanGampleare’s fifth year in a row to run Boston. He said, with the exception of 2018, his time has improved each year, but the course is challenging and doesn’t lend itself to best times. So when he qualified for the 2020 Olympic Trials with a personal record of 2:18:40 at the 2019 Boston Marathon, VanGampleare said it was unexpected. His time was the 26th fastest time of the race and he finished as the top amateur and beat his qualifying time for Boston by almost six minutes. The qualifying time for the Olympic Trials is two hours and nineteen minutes.

“I thought I would probably have to find a race in the fall to make the qualifying time for the trials,” VanGampleare said. “But at the halfway point at Boston, I was 20 seconds over the qualifying time, and since I was pretty close, I thought if I picked up my pace a little over the next few miles I could close the gap.”

And close the gap he did. Running the 16th mile in under five minutes helped put him well under the pace he needed, and VanGampleare said when he saw that all he could think was that he couldn’t screw it up. He continued pushing and finished the second half of the Boston Marathon, with its four uphill sections, a minute faster than the first half. When he crossed the finish, he was pretty sure that he had qualified for the Olympic Trials.

“I was shocked,” he said. “My friend who lives in Boston meets me at the finish line each year, and when I found him, I said, ‘I think I just qualified for the Olympic Trials,’ and he confirmed it since my official time had already been posted.”

VanGampleare said his training hasn’t changed much as he prepares for the trials, with the exception of adding more hills to his long runs. He said the course in Atlanta has rolling hills so he has been running in Garden of the Gods, hoping that training on an exaggerated version of the trials course will help him out. In the last six or seven weeks, he’s been running 120 miles per week.

Competing at the Olympic Trials is a long way from the St. Mary’s High School cross country meets where VanGampleare started his running career. As a freshman in 2004, he joined the cross country team thinking that running might be something he would be good at, although he hadn't run regularly before. As the season progressed, and he was running five to six miles a week, he began seeing improvement.

“When you go from nothing to consistent running, you’ll see improvement and when I did I thought it was a good idea to keep going,” he said.

During his St. Mary’s career, VanGampleare qualified for the state cross country meet all four years, won the league championship his senior year, and placed in the mile at the state track and field meet in his senior season. In his first two years at Creighton University, he ran cross country, but didn’t compete during his final two years after the team experienced a coaching change.

“I didn’t run for two to two-and-a-half years,” VanGampleare said. “Everytime I went out for a run, I was just frustrated that I wasn’t on a team. The bad taste from that coaching change lasted a while.”

After college, VanGampleare returned to Colorado Springs and eventually returned to running. While he had thought about doing a marathon, it wasn’t until one of his former college roommates mentioned wanting to run one that VanGampleare signed up for the Omaha Marathon.

“I was going from 10Ks to a full marathon and wasn’t really sure what I was getting in to,” he said. “I didn’t know how to run a marathon, or how to pace myself so I could survive all 26 miles. I just gave it my best guess and it worked out well.”

VanGampleare said in that first marathon he actually underestimated what he could have done, but that resulted in him having a good race and an overall good experience, which was motivation to keep going. Although training and running marathons is a hobby for VanGampleare, who is an advanced manufacturing engineer at Phillips, he admits that it’s what takes up most of his free time. He said he’s motivated by seeing improvement in his running and setting new personal records. Once a new PR is reached, he’ll set another goal and go through the process again.

“I like tinkering with workouts and training plans and finding what works best for me,” he said. “I like finding ways I can get better and to see how much better I can actually get.”

Now he is on the cusp of completing the goal he has been striving for. The 2020 Olympic Trials could be one of the largest in the history of the event with hundreds more women qualifying than in past years. The top three men and the top three women will represent the United States at the 2020 Olympic Games in Toyko this summer.

“I’m really just happy to be there, to be able to experience this race is a prize in itself,” VanGampleare said. “Of course, I want to have a good race. There are 250 men competing in the trials and based on where I fall in that group, if I finish in the top half, I’ll be pretty happy.”