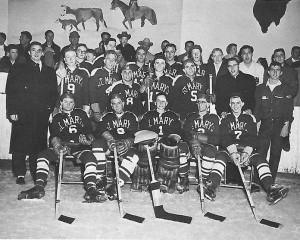 The St. Mary’s High School Exemplary Sport Teams Enshrinement exists to ensure that the history and tradition of the school, as well as contributions of sport teams are celebrated. The Exemplary Sport Teams Enshrinement, established in January 2016, recognizes those who made up teams—including team members, coaches, assistants, and administration—that have made significant contributions to the school by demonstrating exemplary and exceptional ability, team work ethic, and sportsmanship on the playing fields, in school, and in the community. These teams will include not only state champion teams, but those that captured the league title but may have been defeated in a regional, semi-final, or championship game.

The purpose of the Exemplary Sport Teams Enshrinement is to honor, pay tribute to, and perpetuate the memory of sport teams, that either through participation, support, or interest, have made outstanding contributions in the field of athletics or helped St. Mary’s High School in its pursuit of integrity and excellence. The purpose shall also be to remind each generation of athletes of the tradition they must strive to uphold and the ideals that they should strive to realize while they are attending St. Mary’s High School.

Do you remember an exemplary sports team in St. Mary’s past? Nominate them now using the form below.